I felt trained thanks to Tri Now, and I had a plan in place. Of course, I was terrified because of the swim. If I can get through the swim, then I am good on the bike and can survive the run. My goal was to finish before the course closed, and I knew I was going to cut my time very close with that time cut-off.

The swim was a wave start, and it did not bother me at all even when the next wave swam over us, but lots of people were freaking out in the water. I had a hard time calming down and putting my head in the water due to anxiety. It wasn’t until more than half way through the course that I calmed down and found my stroke. I was also stung by a jelly fish on my left arm and thought my watch was shocking me. I figured out it was a jelly fish and decided that I better find my stroke. I was able to focus on the large ferry ship, but I had to change my breathing to the other side because of the waves. Every time I switched to the other side, I was pulled farther away from the buoys. I kept having to zig zag to get back to the markers and find some feet to draft. I checked my stats, and I swam 1.5 miles. I can go faster. I just have to work on finding my stroke and relaxing in the water.

T1 is where I lost most my time because I had to park my bike and run to the damn porta potty. Yes, I have to learn to pee in the water. I was told to just hang on to the canoe. No wonder so many people were hanging on the boards and canoes. 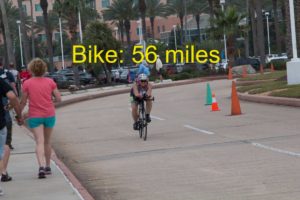 The bike was great, but I need to improve on speed. I averaged 14.9 mph., which is slow. I stopped briefly at each rest stop for nutrition, which could have been done on the bike. I just need to learn how to play with the water bottles and practice tearing off the gels on the bike. I felt I could have gone faster on the bike, but I was not sure because of the run. The wind was not an issue, and I saw many groups drafting each other.  Um, I didn’t know I could draft. Also, the ride was very boring without drafting anyone or talking to anyone. I ended up singing Christmas songs. Out loud. So bored. At the end of the ride, my left foot and right hamstring started cramping, so I need to watch that salt intake.

I lost time here running to the medical stop that was right next to my transition area. I was concerned about the cramping, so I grabbed some salt. Yes, I had salt in my fuel belt, but I completely forgot about it because I was focused on the run and knew I had to get my butt on the course.

That’s me, realizing that I have to run 13.1 miles. I felt a lot better when I saw the Tri-Now tent and people cheering. My nutrition fell apart on the run. After drinking 2.5 bottles of Skratch/Ucan on the bike, plus water, I did not want to drink the mixture on the run. The salt I took from the Aid station made me sick, and I had to use the porta potty again. Too much liquid. So much time was lost on the first loop. After I had some Coke, I felt much better. On the second loop, I started drinking Red Bull at every two aid stations. It was enough to keep me going. I also drank water at the aid stations and poured ice down my back. I kept a ratio of 2:1 on the run, but I felt that I just needed to run more and did not need that walk break, especially since I lost time on the first loop.

The last lap was a killer. I was freaked out when Coach Frank said I had to get to a rest stop by a certain time. I had no idea what rest stop it was. I knew I had plenty of time before the course closed, but now I was totally freaked out because I wanted to finish. I knew that my porta potty breaks had lost time, and I started to panic. That probably was a good thing because it made me push harder for that last lap in total fear. It was on this last lap that I felt like a member of the Tri-Now Family.

Nicole and Nestor ran with me for part of the loop because they saw I was totally scared about finishing. I had to run because I didn’t want to take any walk breaks with them. I’m not sure what I was doing was running. Nestor broke off and Nicole stayed with me. When she broke off, Anya ran with me. When I rounded a corner with about 1.5 to go, I thought I could take a walk break. But there was that damn beach cruiser and Coach Frank. I just kept running with Coach staying on me—thank you!!! Now, I know that I do not have to rely on those walk breaks that have been ingrained in me since Galloway. I can run, but I need to get faster. 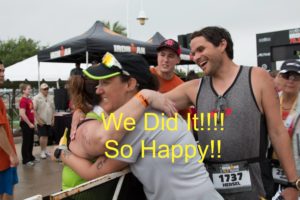 All that training was worth it. It was incredible to cross that line. I was so grateful for my family and my Tri Now family for all their support. The best part was Anya taking my hand and helping me walk to the transition area. She said she loved me and was proud of me. This is huge in a mother/daughter relationship because we butt heads all the time. She also ran 6 miles on Sunday, so maybe she wants to start getting into triathlons. I love it that Gabe volunteered to lead the lead runners on the course. He really had fun, but it showed me that he felt left out of my training. It’s a good thing that triathlons have relays.

Overall, I accomplished my goal. Running  a Half Ironman is just beyond anything I ever thought I could accomplish. Will I do another one? Yes. However, relays are in my future with Gabe. He can cycle, and I can continue to conquer my open water swim nerves and get faster with the run. Now, I just have to figure out how to get my college son, Michael, involved and Anya, my teenager.